This post originally appeared on Angela Maier's Blog but I wanted to repost here to share with my readers as well.

Those of you that know me know that I run. I run a lot. On December 11th, I hit my 700th consecutive day of running without missing a single day. For those of you that run on a regular basis, you know the reflected and meditative power a good peaceful run can bring. I often find myself reflecting on life, on teaching, on my family and just about anything and everything in between. On one of those 4am runs, I found myself thinking about my students and specifically about what I was asking them to do in class. 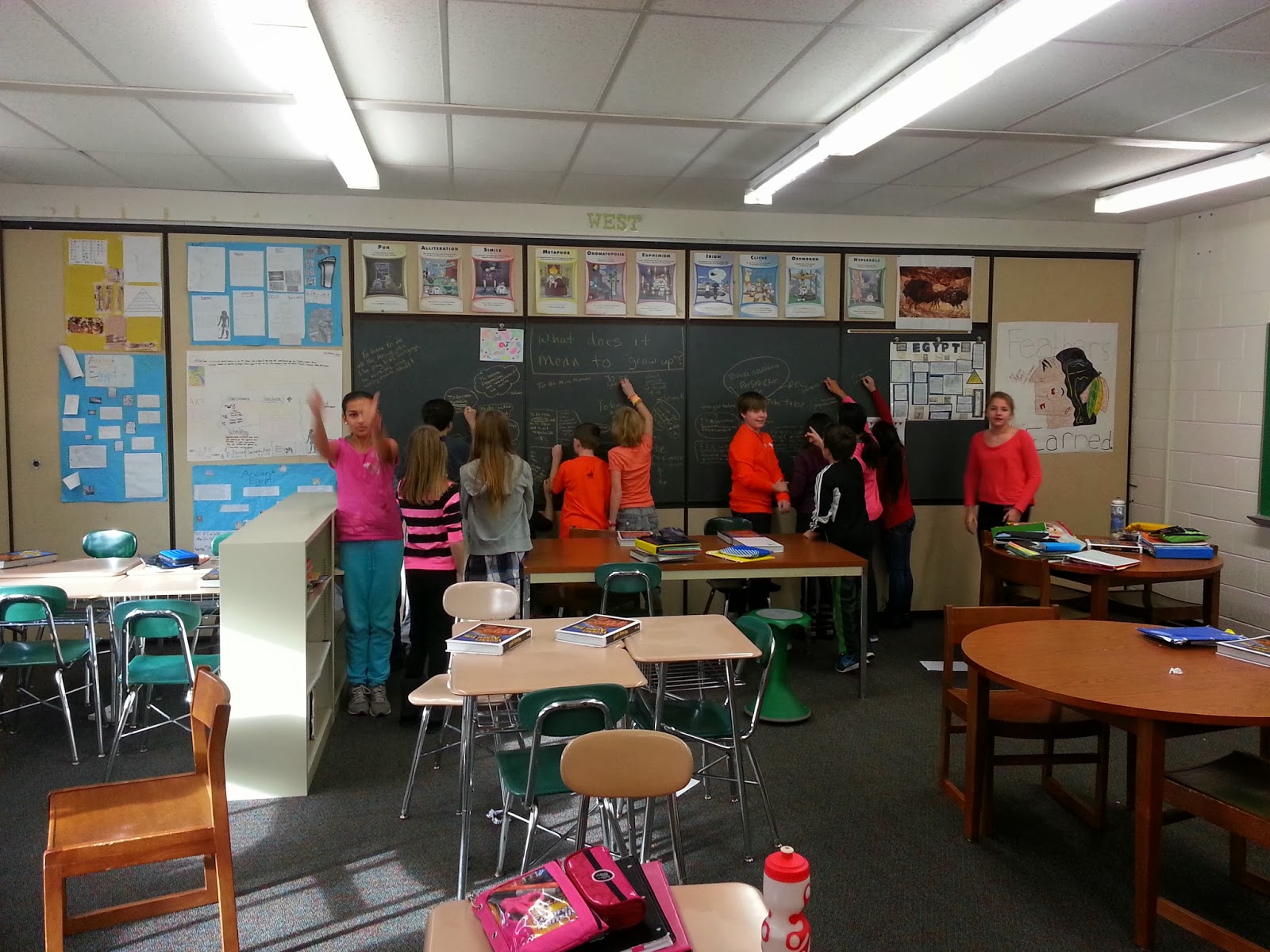 We were in the middle of the Ancient Greece chapter in social science and coming up on the section covering the work of Aristotle, Socrates, and Plato. As I was looking through the content I began thinking of my good friend Chad Miller, a fellow teacher of the year from Hawaii. Chad is a pretty amazing guy who teaches philosophy and English in a high school as well as some graduate level coursework at a college. I have learned a great deal from Chad over the past two years specifically about philosophy and thinking and how to get kids to be philosophers and thinkers.

Around the same time these ideas were rumbling in my head, I stumbled across a tweet from John Robinson about a board they had up in his school. This white board was located in a common space in the school. It was used to write thoughts, questions, and ideas in a public space to spark thinking in an interactive way. This got me thinking about how I could do something in my class to encourage real thinking.

Now some of you are thinking to yourself, “well, wait a minute, aren't you thinking in class everyday?” I would like to believe that is true. I understand the vast majority of the content in the curriculum that I teach requires very low-level thinking. That's not to say I don't use activities that require a great deal of critical thinking but it just didn't feel like I was doing enough “real thinking”. As I looked through the standards and content I was teaching, there seemed to be a lot of “identifying” and “defining” but not a great deal of actual thinking required. If I am being completely honest, even those areas where thinking was needed, I am not sure it was truly valuable thinking.

With this in mind, I touched based with Chad and got a couple of resources from him about how to get my kids thinking. The following day I had a conversation with one of my classes, which happened to be my language arts class. We started talking about thinking and how we could do more of it in school in a real and authentic way. I told them about my idea of starting a board we would post questions and thoughts.

I wasn't sure how the kids would react to it but they were totally all for it. That very afternoon one of the young ladies in my class designed a little sign to put up on the wall that is now called the Thinking Wall. The following morning I posted the first question “What does it mean to grow up?” I didn't think this was too difficult or too abstract of a question because I know that plenty of kids in junior high think about growing up.

What I didn't expect was what really happened. I had only explained the idea of the wall to my language arts class. However, as I stood in the hallway waiting talking to a fellow teacher before social science class started I then turned and looked into my room. What I saw was nearly every single student standing at the wall either reading, talking or writing about the question. It was one of those organic moments that just happened. I had not even told them what to do, how to interact or what my expectations of the activity were going to be. They simply saw the question and ran with it. By the end of that first day, the chalkboards were full of comments and questions and ideas. Naturally there were some very superficial comments about being more mature or being taller. Yet, there was some pretty heavy ones I wrote down because I want to make sure that I use those are some follow-up discussions.

To take it a step further, I introduced the idea of the kids submitting their own questions or thoughts to be put on the wall. My ultimate goal is for them to generate the questions that will go on the board on a weekly basis. Some of the questions the kids have come up with for future use are already exceeding my expectations. One student wants to delve into the difference between knowledge and wisdom.

I asked some of the students after the first couple of days of this first question be on the wall what they thought this new thing. The first response was from Rachel, who said, “I think the wall really brings out a different side of people…what surprised me was that the quiet people had some of the best things to say.”  As with many projects in my class, I don't know where it's going to go. However, I have high hopes as my student Sarah wrote, “I hope this continues the whole year!”

In one short week with one simple question, I am beginning to see great value in intentionally bringing philosophy and thinking into my classroom. It feels as though we are too busy chasing numbers and tracking data to actually allow kids time to think. I can tell you personally, that as soon as I started letting kids think they surprised me with what they were able to do and just how much they had to say.

Since this post appeared on Angels's blog I have had several other questions posted with just as enthusiastic responses from the kids. One particularly hot topic was "Should we value popularity". It lead to some great discussion about the role popularity plays in school as well as how we define popularity.
Posted by Josh