As teachers, we are tasked with teaching content and helping kids grow into productive and successful citizens. We are given a set of content standards we must cover and a battery of assessments to determine if we have succeeded in doing so. Our evaluations are based on how we plan and deliver our lessons as well as other professional duties. However, I think the greatest impact we have on kids is not something we can measure but simply observe. It is the impact when you see one of those “moments”. They are hard to explain, difficult to plan and nearly impossible to measure.

Last week a teacher came to me and told me she had a lesson plan fall through and wondered if the kids could come to the library and read for the period. Of course, I said yes and the 30+ 8th graders settled into the library. I could tell they were burned out on reading given a week of standardized testing they had just completed. So, I pulled out our Keva planks and had them complete some building challenges. The kids were having a blast and really got into the challenges. As we neared the end of the period I gave them the final challenge of seeing how tall of a tower they could build. It was then, that the “moment” started taking shape without my knowledge. 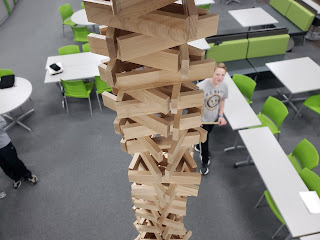 A group of boys started building and were making some great progress with their tower. It swiftly reached 5 feet and then 7 feet and then topped 10 feet. As the period was winding down, the boys kept building and me and the teacher let them keep going. The bell rang and the boys kept going. Kids began spilling out of classrooms and stopped to watch the tower being built. As the tower reached the 11-foot mark, the boys reached out to taller classmates to come over and join in the build. It was awesome. Almost the entire grade level was circling the tower and cheering the boys on. It was a “moment” to remember. The boys decided to end their build and knock their tower down to thunderous applause from their peers and teachers.

To take it a step further the group asked if they could come in at lunch to build a tower that touched the ceiling which is around 14 feet tall. Naturally, I said yes and they showed up to build again. This time we had to bring in a ladder and they succeeded in “touching” the ceiling as their classmates were coming back from lunch. Again their efforts were greeted with applause and high fives.

Building the tower started out as an activity to kill some time and give kids a break from testing and reading. Yet, it became more than that for these kids. I promise you, a moment was created for them they will not soon forget. It is not something that will show up on an assessment or evaluation and not something you can measure. In fact, it is even hard for me to put into words the moment created by and for these kids. It’s was just one of those, “you know it when you experience it” moments.

As teachers, we need to be better at recognizing when these moments are taking shape and let them happen. At one point I will confess a teacher stepped out and yelled at the kids to get to class during the passing period. I am also happy to confess the kids didn’t listen and went on cheering their building classmates on with the full support of every other teacher in the library.

Naturally, I took videos and pictures to make a short iMovie trailer to capture the moment.